PELLEGRINI RECEIVES THE PRIZE AS BEST COMPANY IN THE CATERING SECTOR

On March 5, 2019 at the Auditorium of the Regione Lombardia, in the presence of the Confindustria President Vincenzo Boccia and the Regione Lombardia President Attilio Fontana, Pellegrini was awarded the High Quality Report during the awarding of the 3rd edition of the “Industria Felix Award” – the competing Lombardy “, organized by Industria Felix Magazine, in collaboration with the Centro Studi Economica of Cerved Group SpA.

The awards were given on the basis of research that reviewed about 33 thousand financial statements of companies with registered offices in Lombardia and revenues of between 2 million and 19.8 billion euro, among which Pellegrini was among the best in the region for management performance. 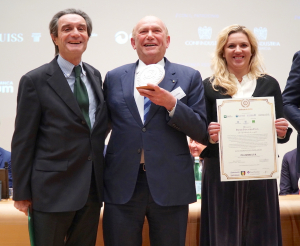